21st Days of Poetry and Wine festival in Ptuj

Thank you for your Open Letter to Europe, which you will read in public tonight at the opening of the 21st Days of Poetry and Wine festival in Ptuj, and in which you have expressed, in rich literary language, your view of the current key challenges facing our continent, where in this year an intensive public debate on the future of Europe and the European Union is taking place.

Me personally, I am not Europa of course, in order to reply to your letter on its behalf, which you primarily devote to political and social responsibility holders in Europe, both institutions and its decision makers, as well as all active European citizens who care about our common future and who can take things and initiative into their own hands; to them – which to you and I signify hope.

I am merely one of the 751 Members of the European Parliament coming from Slovenia, a country that is developing this outstanding poetry festival with a noble wine for the twenty-first time in a row.

As a committed and convinced European, who, not only as a politician, but also as a farmer who still cultivates apple trees on an apple plantation with my own hands, and the father of three children and grandfather of three grandchildren I am worried about the future of our common Europe, which we enrich with our cultural diversity, tolerance, understanding and mutual respect and cooperation. It is true that, as you find in your writing, unfortunately, in Europe, we do not always have unanimous opinions on how to respond to the various challenges of today’s time, such as the refugee and migrant crisis, for which Europe is not the first “responsible/guilty” one but it is the first one to feel the consequences of the causes of the crisis in the Middle East.

I urge all the time that, in solving this great human and humanitarian problem caused by the politics of global geostrategic interests, we must begin to tackle the fundamentals, the underlying causes, not only the consequences of human tragedies, and that the world and the global superpowers, who played their game in this matter, must stop acting dumb. We need to pour ourselves the pure wine, not just in glasses tonight at the Festival of Poetry and Wine or at high receptions, but in world politics. This is what is necessary and inevitable if we all want to stop the motives for triggering wars and violence not only in the European neighbourhood but worldwide.

In your letter to Europe, you mention Greece, Crete. I recently returned from a short visit to the island of Crete, which you also mention, and whose Minoan culture is the cradle of European civilization. Crete has touched my European soul deeply.

I agree with you that princess Europa, as you call her, is currently facing great challenges. “All European children used to be taught stories about Greek culture and mythology in the past,” you write, and I agree: yes, and they still should! We are currently living in a time where there are more and more breaks, different views within Europe. So, I share your thoughts about stories from ancient Greece. This culture is the nucleus of European civilization, which is common to all European nations. We need to focus on what connects us and not on what is disrupting us. Europe must be a strong and independent geopolitical entity. This is the only scenario that leads to a good and prosperous future. After centuries of dark history, with the creation of the European Union, we finally had the continent where countries and nations cooperated and lived in harmony. No one wants a Europe that would be wrapped up in the dark again. Our European civilization is precisely the one that has led technological and cultural progress on earth. We are not trying enough to get to know and respect the EU better.

We lack empathy, we should be more connected in a cultural sense as well. I think that culture is the core of every civilization and every nation. The European Union is the only serious alternative for countries on the European continent.

In your letter, you highlight the real and difficult issues of our European present. But nowadays, in the convenience, even the indulgence of everyday life, many are closing their eyes or wearing rose tinted glasses.

You are very clearly addressing the issue of hospitality; the relation between the newcomers, the strangers and the locals, that it is ugly or inappropriate behaviour of some excuse for the masses of innocent people being left to die in mud and cold … The tragedies of refugees who are fleeing from their homes which are caught in the whirlwind of wars and are fleeing for bare life and survival are deep, while in their escape, unfortunately, many of them become victims of smugglers, including through the Mediterranean Sea, which has become a grave for many.

The fact is that Europe did not respond to this problem in time nor correctly, it was not ready at all! Not even ready for the fact that the refugee crisis was exploited by many others from completely different and recalcitrant interests, those who did not flee from war, but were still able in the open corridor through the Balkan land routes to enter the open borders of the EU without any documents and verifications. Europe with Germany as a lead really was not ready for this and was even very naive with its open borders in 2015. And the fact is as well that Europe has remained lonely in solving this problem, where none of the geopolitical actors who have fuelled the crisis in the Middle East has offered serious help.

The problem is that in Europe we are not talking about it enough but it is important for our common future, is the problem of the successful integration of social groups coming from third countries. As you are probably better aware of the situation in Belgium than I am considering I am working there temporarily, and this is similar in many places in Europe, the great problem is the unsuccessful integration of people coming to Europe from other continents. Many young generations born in Europe to parents from the Orient, run out of positive opportunities in Europe – they are closed in the ghetto in metropolitan areas or in the deserted countryside (Spain), statistically with much greater unemployment among young people than for Europeans born to European parents. They are losing the perspective of an equal future and opportunities; in such circumstances, many of these young people are much easier to be subjected to radicalization and propaganda by the Islamic state, not only to be general and metaphorical, but concrete in terms of the problem, which is the other side of the acute problems we are witnessing in Europe with the spread of modern terrorism.

As you conclude in your letter, I share the view that Europe has become a victim of geostrategic games, and in this situation, Europe itself is facing the issue of universal human rights. Inexplicably, with your words, you point your finger on the main poker player of the current situation in Europe, as well as the founder of its fate after the Second World War. I agree that from the time of World War II to this day, Europe has been setting itself and the European philosophy to the forefront with not enough ambition. The feeling of its own guilt over past wars, especially World War II, which took place primarily on European soil, is maybe a key reason for the lack of greater European self-confidence in the world’s political “poker,” as you call it. However, I would like to remind you of the individuals, the great visionaries, and the fathers of the European Union, as we know it today, who immediately after the Second World War, were reasonable enough to get the peoples of Europe who had fought each other for centuries to sit down at the same table and agree on cooperation for the common good, for a better future for people.

I deeply agree with you, Mr Hertmans, that today our children and grandchildren do not have enough knowledge about Greek history and mythology, about Minoan civilization, I am equally convinced that European children have too little knowledge of how the

European Union was founded on the ruins and human tragedies of the Second World War. On May 9th, 1950, thanks to the fathers of today’s EU: Robert Schumann (Frenchman born in Luxembourg, a political thinker and activist, repeatedly expelled from France and later the French Prime Minister and the first President of the European Parliamentary Assembly (1958-1960)), Konrad Adenauer (born in Cologne, Rhenish Prussia, where the battles were fought for centuries between the Germans the French, the first post-war Chancellor of the Federal Republic of Germany (1948-1963), responsible for the development of Germany after the Second World War) and Alcide De Gasperi (born in Treviso in the province of Trentino, a member of the Austro-Hungarian Parliament, a fighter against fascism, the founder of Christian democracy In Italy and the Prime Minister of the Italian Government (1945-1953), was the beginning of deepened cooperation between the six founding members of present-day EU with the objectives of preserving and strengthening peace, economic development, creating the prosperity of citizens, cooperation between countries that have often been hostile in the past …

Your letter to Europe is part of a very important public voice in the current debate on our common European future. It will be said a lot more about the direction of our future in the coming months, even years, and yet, as a critical individual, albeit an active politician, I personally look forward to discussing and confronting opinions with a single purpose that is to provide to our princess Europa with a bright future for us all, EU citizens, as well as all those who are really in the most need of humanitarian help and who we can and must assist morally and ethically, while at the same time we will not allow Europe to be a hostage of some global poker game.

The greatest challenge for our continent, which, however, we must be and we will be able to cope with!

I read your open letter to Europe with immense pleasure, especially because there are no masks and in the light of all the ruthless truth you want to hope for Europe and you can see it – in the people themselves.

I was very fond of how you chronologically classified the letter into different stages of European history. It is true that we live in a turbulent and unpredictable world. The wars that occur in the immediate vicinity of our continent have a definite impact on the population. In these times, it is important to have the courage and optimism that your letter expresses. I am very happy and honoured that you were able to come to our homeland. Slovenia is one of those members of the European Union where people still strongly believe in the importance of Europe in both political and cultural terms, although we also have some divided opinions. Slovenia is also one of the few countries

that tasted all three totalitarian regimes: fascism, communism, and Nazism. Therefore, the people of our homeland are aware of the importance of Europe in maintaining peace and stability.  Our young people often participate in international exchanges in the field of culture, where, through various European programmes, they learn about the cultural diversity of our continent. One of the motions of the European Union is “united in diversity.” We are diverse people who definitely have the basic core. Thank you for visiting our country, and especially for your sharpened look at the current challenges of Europe and for your hope in its, nonetheless, bright future.

Member of the European Parliament 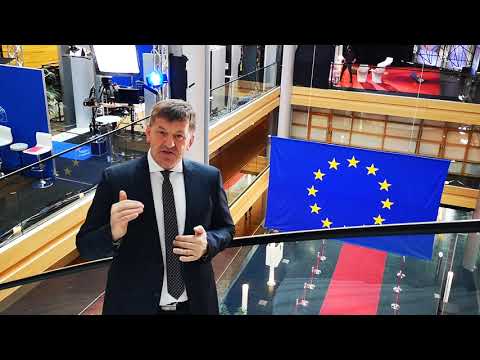 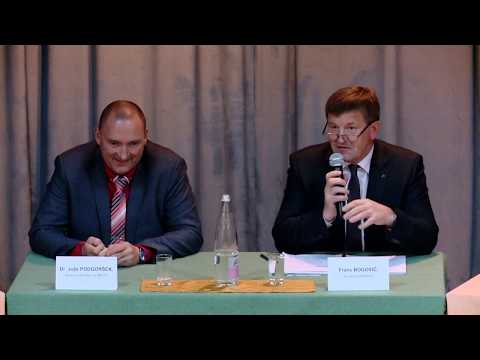 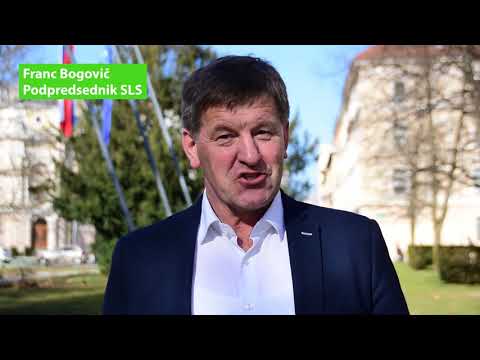